Russia and the NATO Expansion

A little story I want to tell about the Russian Federation and the expansion of NATO under the direction of the US Government.

1991: the Soviet Union dissolution was largely complete. All the former members of the Union were now their own nation states and several of the more radically evolving nations (like Poland) were already being approached by NATO and Europe (who was in proto-EU stages) for membership in their treaties.

1993: Yeltsin and the Russian Duma (Congress) were super worried about NATO expanding into former Soviet territories (especially Poland, Hungary, Ukraine, and Czechslovakia) and basically just drawing a new Cold War line right up to the Russian border and beginning neo-isolation on Russia in their weakened state. Literally the entire Duma joined the “Anti-NATO Expansion” caucus. Yeltsin told Clinton and Diplomats “stop expanding NATO and Europe Treaties like this, it looks like you’re going to screw us; instead let’s get all of us former Soviet countries into the treaties together”. So US said “let’s make a new org, ‘Partnership for Peace’, within NATO that everyone can join without becoming full members'.

U.S. officials led Russian President Boris Yeltsin to believe in 1993 that the Partnership for Peace was the alternative to NATO expansion, rather than a precursor to it, while simultaneously planning for expansion after Yeltsin’s re-election bid in 1996 and telling the Russians repeatedly that the future European security system would include, not exclude, Russia.

1994: Clinton goes to Prague and meets with the leaders of the Czech Republic, Poland, Hungary, and Slovakia saying they’re on a “track that will lead to NATO membership” and that “does not draw another line dividing Europe a few hundred miles to the east.” They don’t say anything to Russia. Yeltsin gets pissed, gets a ton of shit from the Duma, and says to US “you said you weren’t expanding NATO, but you’re promising all these countries membership”. To which the US says, “well of course we’re expanding, that was always the plan and there’s nothing you can do about it.” When Yeltsin complains that US agreed not to do that, the ambassadors literally say “Boris was drunk during our meetings and must have misunderstood” (Boris Yeltsin had a well known drinking problem). Clinton again agrees not to do anything else until after 1996 elections (US and Russia have the same presidential cycle).

1995: The U.S. House of Representatives adopted the National Security Revitalisation Act providing for the extension of NATO to include the Czech Republic, Poland, Slovakia and Hungary.

1996: President Bill Clinton in a speech in Detroit presents a specific NATO enlargement timeline saying that the first new member states from Central and Eastern Europe should be admitted to NATO before 1999.

1997: In the Madrid conference, NATO officially invites Poland, Hungary, and Czechoslovakia to join as full members. Russia is pissed; Yeltsin looks like a weak fool. NATO now has the same Eastern borders that Nazi Germany had before the 1941 invasion of the Soviet Union.

Now, Serbia has been a pseudo-protectorate of Russia for a long time. Russians and Serbians have ethnic and cultural ties going back centuries. Remember, World War I largely started because Austro-Hungarians invaded Serbia (after some serbs killed the Austrian Archduke) and Russia sent the army to defend Serbia. Allies on both sides got involved and WHAMMY … The War to End All Wars (or maybe not).

March 1999: NATO starts launching airstrikes in Serbia and deploying peace keeping forces. All without talking to Russia. Like at all. To put in perspective, imagine Russia unilaterally attacking Guatemala or Panama. The Duma is once again pissed off, Yeltsin looks like a bigger tool, and soon after he resigns in disgrace. In Russia, many still consider Yeltsin a puppet of the west.

Now who did Yeltsin pick as his successor? … Vladimir Putin.

One must not forget the calculated and deliberate disinformation that Russia has been practising regarding its relations with the Alliance. It consistently uses the myth of “betrayal of the West”, blaming NATO nations for being the primary cause of the current state of NATO-Russia relations.

2014: Revolution in Ukraine, followed by NATO acceptance of Ukraine as an aspirant NATO member.

If you aren’t familiar with the geography of that part of the world, it looks like this: 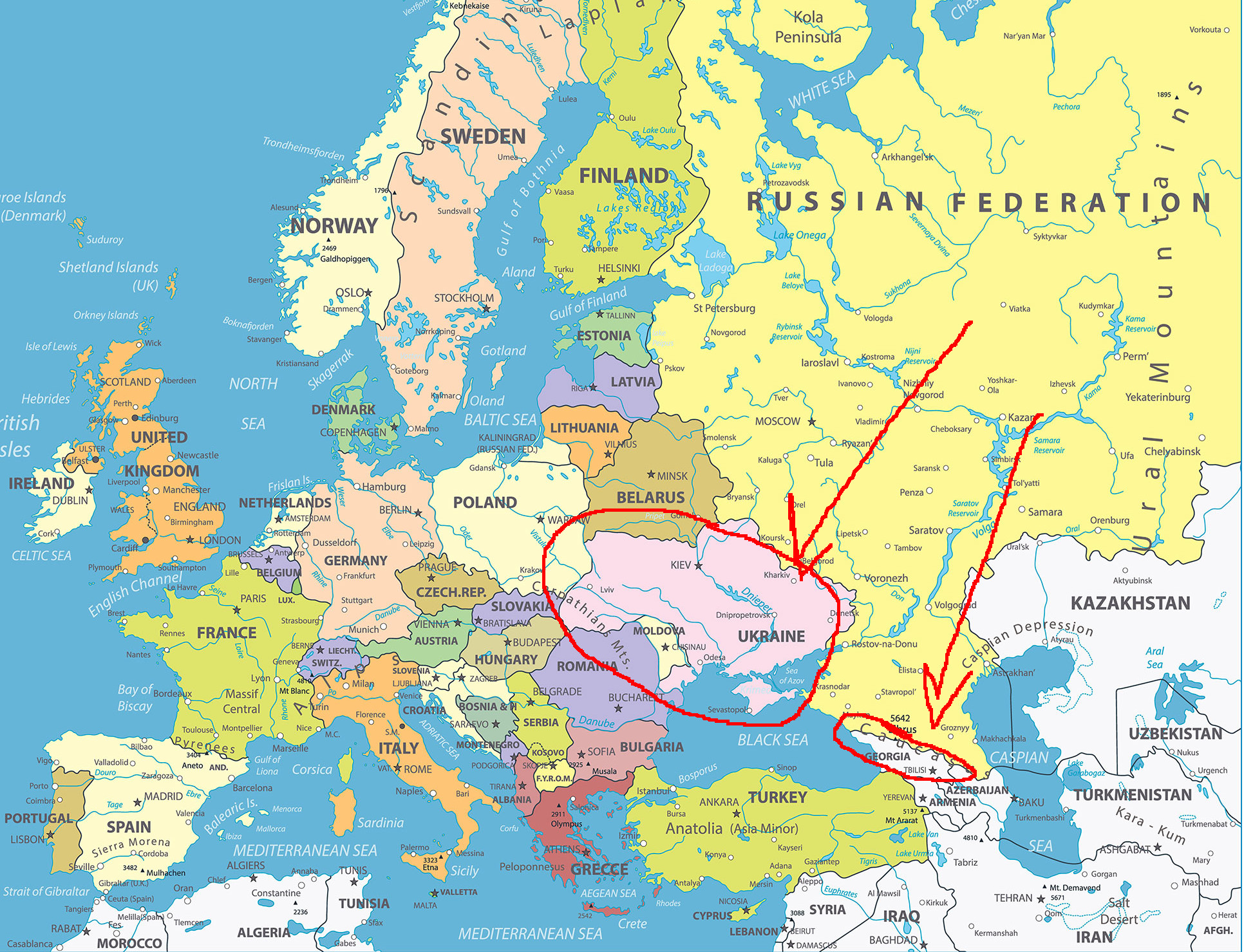 Ukraine and Georgia are those countries on the southern borders of Russia.

Why has Vladimir Putin not embraced relations with the west?